In 1987, the University purchased the section of Wilbrod Street between Waller and Cumberland Streets, renaming it Séraphin-Marion Street.  Séraphin Marion (1896-1983) was a historian and man of letters with close links to the University from which he obtained a bachelor's degree in 1918 and a master's degree in arts in 1922. From 1926 to 1954, he taught French literature and French-Canadian literature at the University. This eminent Franco-Ontarian was later awarded the status of Professor Emeritus.

Recently renovated, the house at 143 Séraphin-Marion Street also holds significant historical interest. Its construction dates back to 1877, making it the second oldest house on the street. It was only in 1970 however, that the University purchased the premises and finally came to own all the properties on Séraphin-Marion Street. Since 1986, this building is home to the administrative offices of the Women's Studies Program.

The buildings located on Stewart Street, constructed at the turn of the century, are home to the Department of Criminology, Classical Studies and of Language Services.

➥ Back to the interactive map 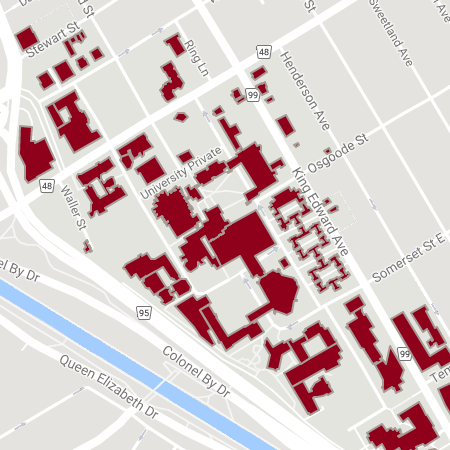